Gundam X is a very maligned show. It was cut short by 10 episodes and was a commercial failure. But it achieves something that its direct predecessor Gundam Wing failed at, which is telling a damn good story. Gundam X may not have done well as a Gundam show, but it was a great anime.

Indeed, X was an unlucky project from the very start. It started right after the popular Wing ended, which had ushered in a new era of popularity for Gundam, as well as successfully attracting female fans to the franchise (which did mar my enjoyment of Gundam irreparably). So expectations were high.

Instead of flamboyant and distinctive Gundam designs from Wing, X had rather spartan Gundams and most of the grunts were throwaway designs to boot (I wouldn’t even know their names if not for MAHQ). It made for bad model sales, and I don’t even remember seeing grunt kits from X. The Gundams of X weren’t the broken mechs that the Wing boys toted around. Even the Satellite Cannon had a lot of limitations–it could only be used when the moon was out, and took too long to charge. When I saw both shows as a kid, I concluded that Wing was much better, because it had stronger Gundams, more explosions, and more [pointless] fighting. 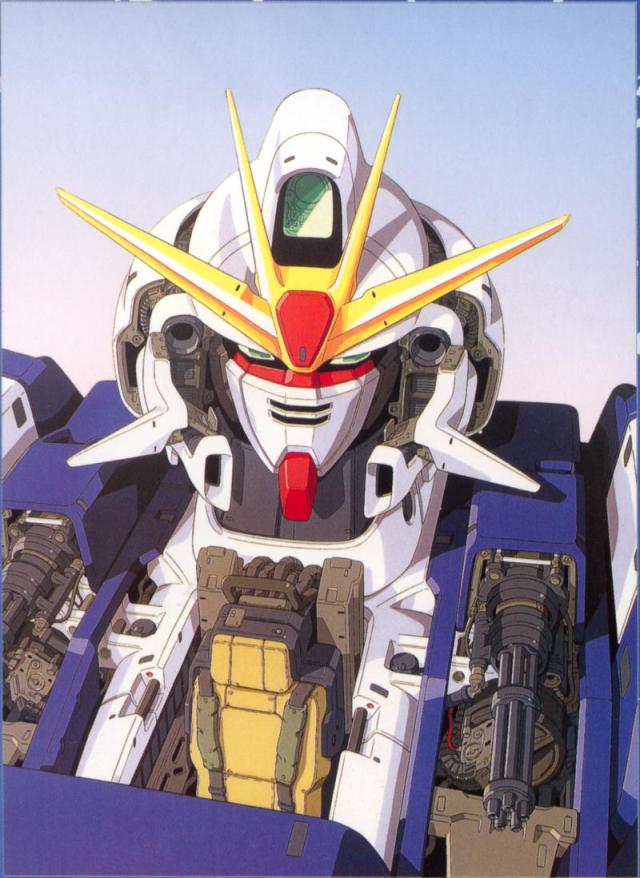 I did change my mind after getting older. Wing easily had the worst writing out of all Gundams, and I couldn’t even remember most of its plot without resorting to MAHQ summaries. It was really a stupid, empty pew pew show. X, however, was everything Wing was not. There was a sense of cohesion between the story arcs, and the narrative is enjoyably straightforward.

And the ending. It sets apart X from every other Gundam show there is. It ends quietly, not with a bang, and certainly not with a whimper either. It ends with a wish, that somehow Garrod and Tiffa could lead normal lives, putting aside the words “Gundam” and “Newtype” away. And after sitting through the lives of this couple through 39 episodes, I know for a fact that they can make it happen. There were copious amounts of dialogue, but they were all relevant, and actually made sense. It didn’t feel rushed to me.

When you find love in your heart...

Even a random anon from /m/ said:

My wife delayed telling me that she was in LABOR with our 4th kid so we could watch the end of this thing.

Yes, it is very satisfying.

My mecha-fu, which matured over the years, was also suitably impressed. The Gundams of X turned out to be cooler than the ones in Wing. Leopard really felt like a long-range support unit, always skidding along the ground and needing a separate marine configuration. In contrast, Heavyarms had its acrobatic shenanigans and was even more invincible with the folding knife than at full ammo. Airmaster was a simple design that was pleasing to watch in action. All X incarnations were awesome (Divider most of all), and the Double X manages to be the heroes’ trump card without destroying the sense of challenge for the story. And the enemy Gundams were menacing without looking too freaky (see: Devil Gundam). 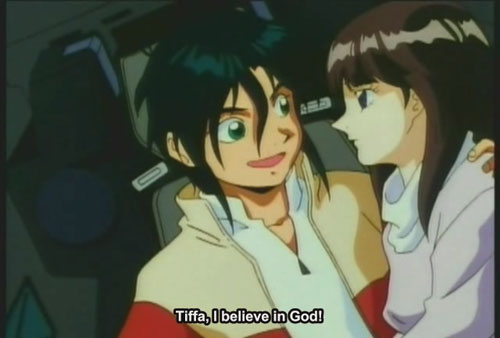 Nothing like successfully activating a dormant superweapon to knock some belief in a higher power.

And Garrod is awesome. He does the job with 80% less whine than other Gundam protagonists, and warms up to the audience fast. His skill at piloting is definitely good (even adapting from land to space combat in one sitting), and doesn’t cheat with silly hax. For those allergic to Gundam romance, I have good news for you: Garrod and Tiffa are at tier of their own, because they work. There’s practically zero melodrama, and they manage to be sweet without overt displays of affection. It’s a silent, real love that anyone would appreciate.

It’s a tragedy, really. For every Gundam fan who appreciates X, there are probably twenty raving fanboys for Wing/SEED/00. In terms of pure emotional connection, X is my favorite, because its message is both down-to-earth and wholly optimistic. Despite having made mistakes in the past, we all have the capacity to change the future for ourselves, and screw silly premonitions. That is what X tells us.

In the end, Gundam X will remain an underappreciated, underrated, underwatched show. But I’m always trying to get others to watch it. For starters, it’s actually sort of a proto-Eureka Seven–the premise of boy-meets-aloof-girl-with-mysterious-power is there, and is a coming-of-age story at heart.  Plus, as an AU series, it’s closer to UC than its peers. If you complain that the Gundam franchise is mostly the same depressing, senseless fare, I urge you to give Gundam X a try.

...and here is the obligatory GARrod motivator.

Because it starts with dreams, comes to a resolution, and ends with a human touch.