It Was A Long, Hard-fought Battle, But I Finally Conquered Armored Trooper Votoms

This will be a quick post, despite the long title. Spoilers aplenty.

I just finished Votoms TV less than an hour ago. It was not an easy show to finish–it hasn’t aged well over the years, and it progressively became more muddled as I went further down the line. I was really annoyed that the fourth arc chucked out the whole PS plotline out of the window and went with CHIRICO IS THE DESTINED MESSIAH instead. Wiseman is also a really dumb name for a god, just saying. 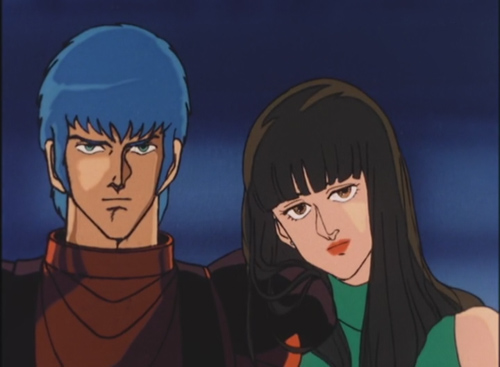 Poor Fyana. I actually like her a lot, but she got really shafted in the fourth arc.

Well, the show did address the theme of the Overman, if a little too literally. In episode 5, Chirico says “God is dead”. 47 episodes later, Chirico kills God, rejecting God’s offer to make him His successor. It’s not as meaningful as I’d like it to be, but hey, Nietzsche is my favorite philosopher. I’ll leave it to the experts instead to chew on this.

I was really afraid that the show would end in a trainwreck. Chirico taking command of the shady organization and directing the entire galaxy’s hatred towards him reminds me of some other stories (I am also astounded to discover that Votoms was produced just a couple of years after God Emperor of Dune). But the last three episodes were chock full of action that made for the excruciating third arc, which I found very weak. Somehow, Chirico betraying Wiseman at the last possible moment jumped on me as something the blue-haired badass had been planning to do. And the ending was really good. Like Code Geass R2’s ending, which surprisingly redeemed the show’s many problems.

It was a fitting end to a show full of endless tension and fighting. For all the blood and grime and smoke that it had boasted, Votoms ended on a hopeful note, that someday Chirico and Fyana would wake up to a galaxy where there was no more war, and that no one would ever exploit them again. (I am aware that sequels exist, though. Le sigh.)

So, do I recommend this show to others? If you’re hardcore enough about robots, then go pick this one up–while decidedly low on budget, the mecha action is deliciously savage and visceral. The coffee of Uoodo is bitter indeed. And yes, it exists!

Otherwise, stay away, unless you want to experience 52 episodes worth of ugly people wearing the ugliest costumes ever.

Banner of the Stars is next.

This entry was posted in Anime, Mecha and tagged armored trooper votoms. Bookmark the permalink.

3 Responses to It Was A Long, Hard-fought Battle, But I Finally Conquered Armored Trooper Votoms