The Sapphire Mask is a music project inspired by mecha anime. I love the concept–as a fan of good soundtracks, they evoke intense feelings about the story even long after finishing it. In The Sapphire Mask’s case, the soundtrack is the main product, but just reading the story framework gives enough context to make it feel like it’s a full-fledged mecha anime.

According to composer William Ascenzo:

I came up with a basic story heavily inspired by various entries in the Mobile Suit Gundam series last summer and used it as a framework to plan the music around (I’ve included the story in the albums, but I intend for the music to stand on its own). Eventually a few other giant robot influences worked their way in, especially Evangelion, and the album ended up getting split in two so that I could better set milestones for myself. I’d say the music is most visibly inspired by Hiroyuki Sawano’s work on Gundam Unicorn, Kenji Kawai’s work on Gundam 00, and Shiro Sagisu’s work on Rebuild of Evangelion (There’s probably a bit of Yoshikawa Kei’s Gundam AGE soundtrack in there–as horrid as the series was, the score was solid).

A friend of mine worked with me designing the giant robots (i.e. I told him what I wanted and he took my ideas and made them better) and was responsible for the track art. I’d describe the aesthetic he used here as reminiscent of Ikuto Yamashita’s Evangelion designs and Shigeto Koyama’s work on Star Driver. I highly advise checking out his blog because he does some great work.

If I could describe the music, it’s pretty modern-ish with copious use of electric guitars and a female choir. The arrangement leans on restraint, and doesn’t have an overblown epic feel that a lot of mecha soundtracks are guilty of. All in all, it could serve as cool BGM for a sci-fi tabletop RPG session. 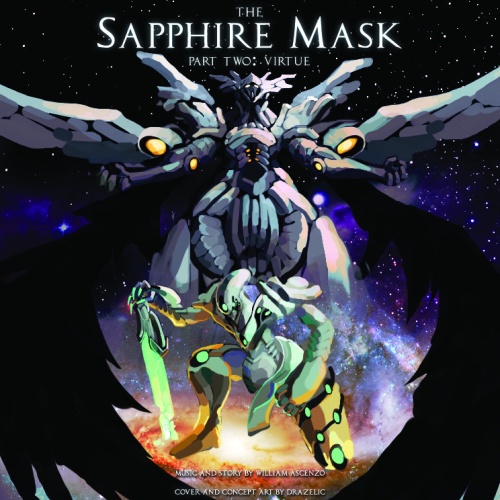 The concept art and mecha design are great, too. There’s a good contrast between alien-like and real robot aesthetics. I would totally watch a show like this.

There are two albums in this project:

If you liked it, please support the composer!

This entry was posted in Mecha, Music and tagged the sapphire mask. Bookmark the permalink.